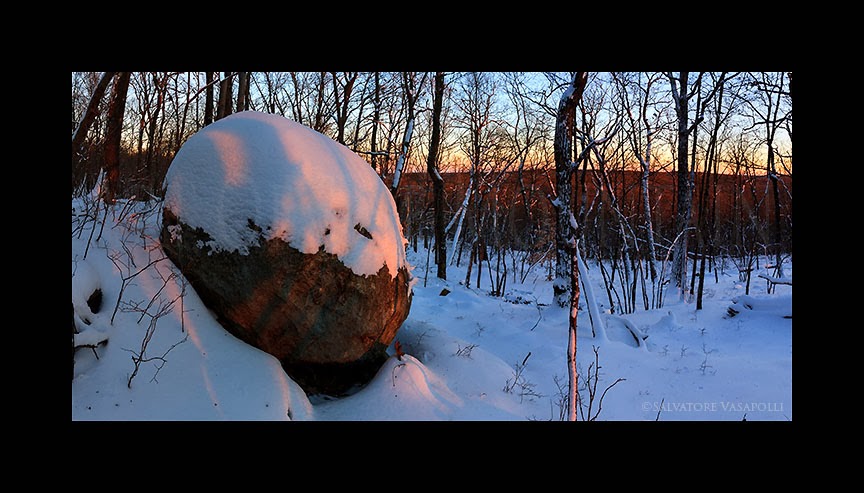 
The winter of 2013/2014 has been a mix bag of cold and snow one week then warm and rain the next week. In the Highlands mountains of northern New Jersey, nothing refreshes the landscape as dramatically as a fresh snowfall. I was lucky to get the chance to make it out as a arctic cold blast brought exceptionally clear skies. The snow covered forested mountains do make for a fairy tale wonderland and the clear cold sky makes winter magic light!

I am not aware where the name Bowling Green Mountain came from or who gave it the name but a walk along its consistent level ridge top one can assume it came from the wide green swath when a local farmer or charcoal logger logged its top to create a long green fairway- hence the name. In the 1960's the southern end became part of the ski area known as Snow Bowl. After about a twenty year span, then too Snow Bowl passed into the annuls of lost New Jersey ski areas. Today its part of a series of conservation preservation, such as, New Jersey Wildlife Management Areas, Green Acres, Farm Acres and Morris County Parkland known as Mahlon Dickerson Reservation.

Today, the mountain has regained it forest from the cutting axes and a few large Oak trees exist where they were preserved by the owners of the demised ski area. Young Beech trees, the true climate species of this region, make an appearance far from its seeded source- a tree once again protected by the owners of Snow Bowl. The forest is made up mainly of succession colonizing species like Birches and Poplar. Maple and Oak the two of the original five climax tree species that included, American Chestnut, White Pine and Beech dominate the landscape. One end of the mountain, too exposed to the elements, a White Pine forest makes it comeback. The mountain landscape is full of wildlife as well. One that includes Bears, Turkey, Whitetail Deer, Fox, Beaver and the return of the call of the Coyote!

Sadly, we might never see the Chestnut forest again. But who knows? If this area could come back from the Wisconsin Ice Sheet, the one that left the granitic boulder in the picture above, who knows what the future holds for the Highland's fifth highest at 1,385"!