The combination of using an EF-S lens and Metabones Lens Adapter together results in a very unique image as this view from Fonts Point in Anza Borrego State Park, California. The almost 360 degree image circle it produces allows the photographer the versatility of choosing three final image orientations of square, vertical or horizontal. Though I have not experimented with this combination on other camera’s other then my Sony A7r MII body. I do believe the result should be the same on any other mirrorless camera’s and not one with a mirror as it might result in damage to your camera’s mirror. So please do not try it.

The original image circle seems almost a complete one and would look so except in this image you can see the sides of the inner lens and also my Lee Filter holder at the end of the lens. The wide angle lens is over emphasized and nearly within the Depth of Field as I maxed out the f-stop. As you can see there is some Distortion, Vignette and Chromatic Aberrations beyond what the typical lens profile can handle. Only additional manual corrections can help improve those to the extent of which your crop will include or exclude and how much manipulation you which to further exceed. 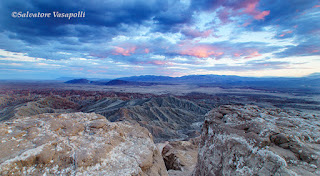 This particular composition transforms easily into all orientations of square, vertical or horizontal as I intended it to do. Yes, It is true that the cropped image is smaller file wise than if I had not used the EF-S and used a standard full frame but I wish to utilize the wider than normal 10mm angle of the 10-22mm canon lens. If I set the camera setting to auto APS-C Sensor size instead of full frame size it would lose up to 43mb’s of image size. I would also lose the ability of selecting orientation format! Now remember this is using the Sony a7rII body. It’s image size is 42mp. A half image crop is 21mp. That’s a lot of room to play with and still have a decent final images size that can be enlarged without much loss of image quality. Also, the Sony has no Optical Low-Pass filter so it’s images are sharper and sharper is better when interpolating smaller to larger images. Please see the last image below. 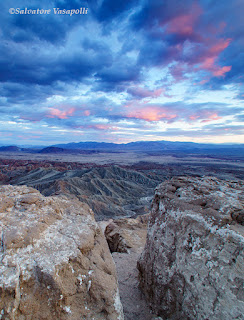 Here is an image explaining files size as to cropping compared to auto APS-C sensor that the EF-S lens specifically the 10-22mm canon lens. Size is in inches! 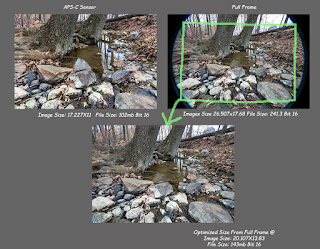 
As many of you know I was recently in Maine teaching my workshop. Here is a short gallery of images from that event.


The seasons do change in Acadia National Park but now even the season themselves have changed. In the many 36 years of photographing here, I have seen a drastic change in the fall. It is getting warmer and dryer. It was not uncommon for snow and wet cool rains.  Long pants and sweaters and rain jackets were general day wear. It is not a good thing but it is an enjoyable one even wearing Shorts- I even shot next to a photographer in shorts and Gators at predawn Otter Cliffs on morning. By midday and the next day, I too was attired in summer garb. We did get a few frosty mornings which is always good. But, the first rain-less trip ever, produced more grand sunset and sunrise landscapes than in the past. Still autumn was in full swing by weeks end. All in all,  we spent the full trip awe-inspired!

Hope you were inspired by these few samples of Acadia Life.
If interested in joining next year's workshop please inquire by calling me at (973) 464-3354


Thanks For Looking,
Salvatore Vasapolli